A Visit to the Plague Village 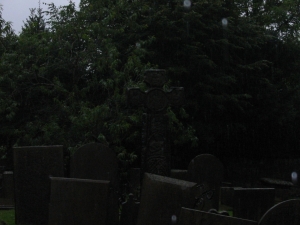 The churchyard at Eyam, Derbyshire, on the rainy day we visited.

It was a very rainy day, something not unheard-of in those parts. We were making our way across the midsection of England from visiting a friend in Shropshire over to our next stop, Cambridge.

But first we had to make a stop.

Some would say a morbid stop; but one I wanted to make nonetheless.  You see, I had read Year of Wonders: A Novel of the Plague some years earlier and wanted to see the town in which it all transpired.

The gloomy weather was a fitting backdrop for our visit to Eyam, Derbyshire, UK. (You can see better pictures of the churchyard at the link.)

It was moving enter the church and see the names of the Plague victims on the walls and to know that the reverend at the time urged a quarantine for the entire town to avoid spreading the Plague to the rest of England.

Such a forward-looking act by him and a selfless act by all the townspeople.

The rain cleared as we left Eyam and continued on our way to Cambridge.

I was glad we visited.

[I was reminded of our 2002 visit to Eyam by an email I received from the “Now I Know” list. Today’s mailing was “The Plague Village.” Thank you, Dan Lewis, for the memories.]