The more-than year-long odyssey is about over. In June 2012 we went to closure on foreclosure we bought, spent a couple months or so finalizing the design of a major addition, and began construction just when the weather turned crisp — no, cold.  The major part of our construction was in the dead of winter.  Mercifully, the hard freeze held off long enough to permit footings to be poured. 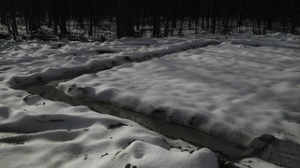 Footers in the Snow

Fortunately, we had done a lot of the site prep work before the weather turned cold.  This included taking down some trees; demo’ing an old, dangerous “deck/patio” out back (pictured below); and installing new windows and siding on the old (original) house. 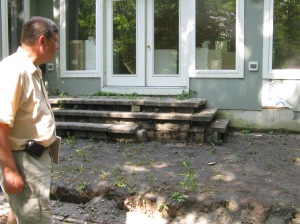 There is now a wooden deck across the back of the house from the Master Bedroom to the sun room. It would have cost too much to tear out and rebuild this terrace — and integrate it into the new design; and we would still be left with a maintenance nightmare (note the greenery shooting up between the bricks).

Some odd juxtapositions appeared at various times during the building process.

The whole process felt like we were in the middle of a This Old House project. (In fact, I often thought that our project would have been a great Project House for that show; but they usually work on old houses, an ours was only about 12 years old.)  Instead of Richard, we had Don. Instead of Tommy, we had Scott.  But I think we had the best crew. Evar.  You can see their (and others’) handiwork in some pictures I’ll post later.

We had a great team working on the house.  Because of the late start, most of the outside work — setting the footers, laying the foundation, doing framing and roofing — occurred in the coldest months of the year. Bless them all for working diligently in those conditions.  And not just the cold, but the wind! My god, the wind!  It was unusually windy up at the site in the early months of the year.  The constant sound of flapping Tyvek™ greeted us each time we visited the site.  The crew spent many hours re-securing the covering until the siding could go on.

It was particularly windy the day they hoisted the garage walls into place. This video gives some idea of the wind.

So, in exactly 1 month we’ll be living in our new home.  It was a long time coming, and an experience I’ll never forget; but we’ll be HOME.

Previous posts in this series.